Auction House is a program that allows users to exchange assets within the Solana blockchain.

There are plenty of ways to exchange assets on Solana, so why another program focused on solving this problem? Let's dive deep into that.

The ethos of this program is to allow anyone to create and configure their own marketplace and even provide their own custom logic on how assets should be exchanged. The motivation behind the Auction House protocol is to create a healthy ecosystem of marketplaces that focus on different use-cases, and more importantly, each bringing their own flavor into the way they allow users to trade assets.

The most important aspect of the Auction House program is that it provides ownership of assets to the user.

Traditionally, as soon as the user lists an asset on a marketplace, the asset is moved from the user's wallet into a wallet known as the Escrow wallet owned by the marketplace and is kept or escrowed there until the asset is delisted or sold. This poses some concerns:

This is where Auction House shows its power. Its a transaction protocol that allows marketplaces to implement an escrow-less sales contract, thus providing ownership of assets to the users. 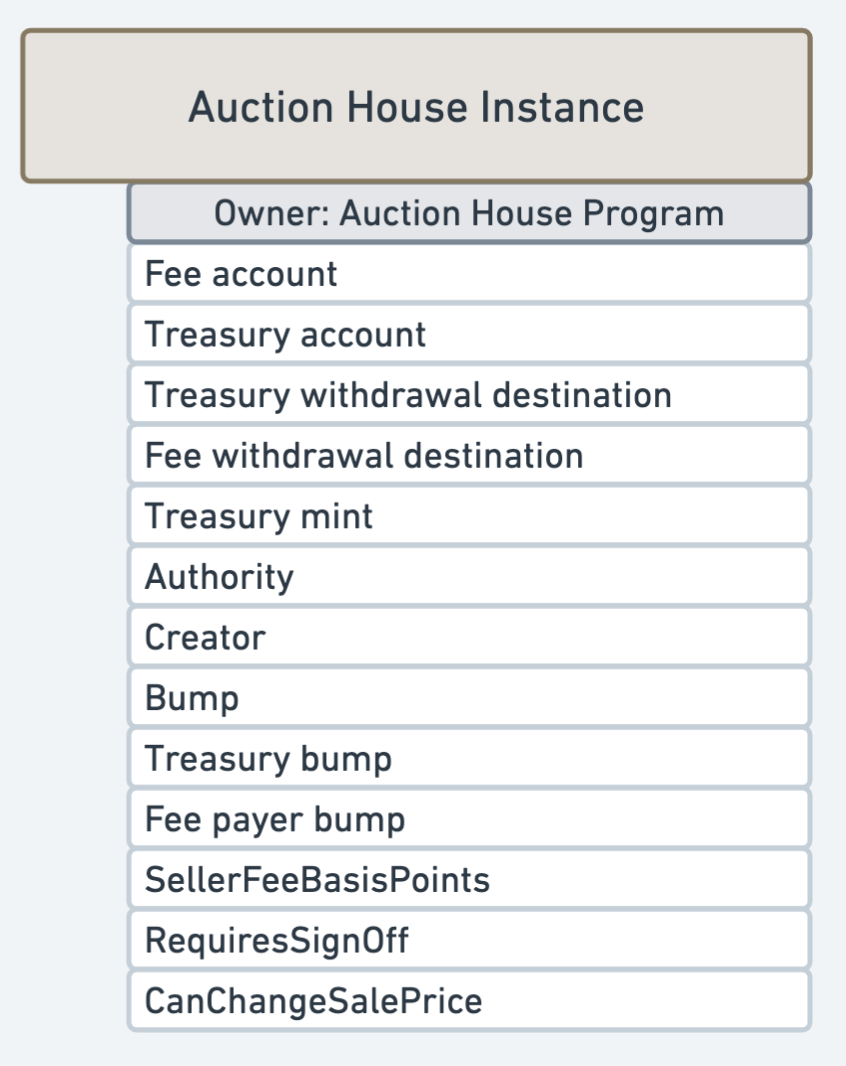 The account can be configured in whichever way the user wants. We'll talk more about these configurations in a dedicated page but here are some interesting configurable parameters:

Once we have an active Auction House, users can start listing assets and bidding on assets on the marketplace.

When a user lists an asset, the Auction House does two things: 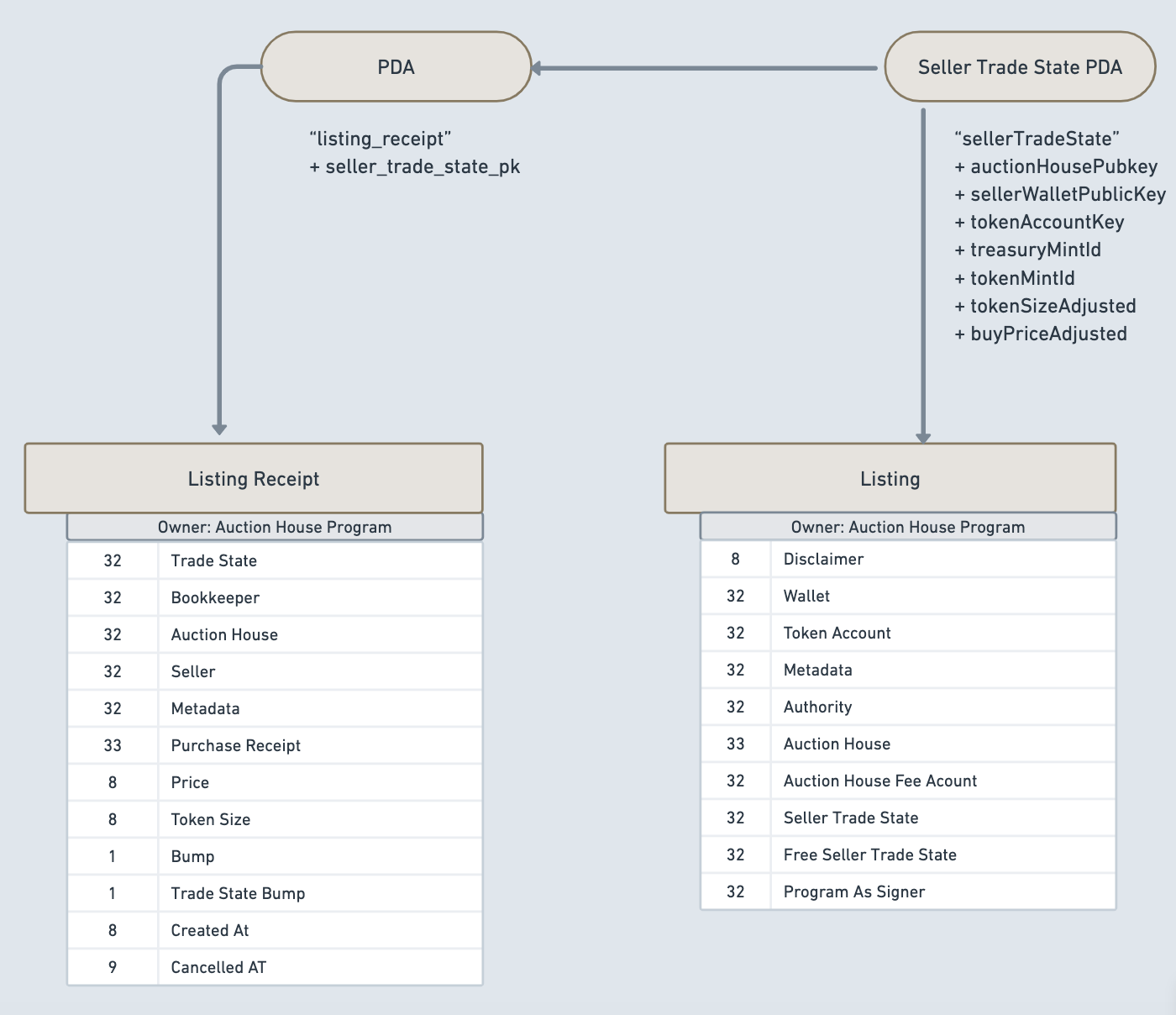 Similar to the case of listing, when a user places a bid, the Auction House creates a Buy Order. In other words, it creates the BuyerTradeState PDA representing the bid. The bid amount (native or SPL tokens) needs to be transferred manually by the marketplace to the BuyerEscrowAccount PDA, which holds this amount till the sale goes through.

Once we have a listing and at least one bid placed for a given asset, a trade can be completed by calling the executeSale instruction.

So far, we've talked about exchanging assets using an Auction House account, but we've not dug into what type of assets can be exchanged that way. The most popular assets that can be listed in an Auction House are Non-Fungible Tokens (NFTs).

However, these are not the only assets that can benefit from the Auction House program. In fact, an asset can be any SPL Token so long as it has a Metadata account attached to its Mint account. If you'd like to know more about SPL Token and Metadata accounts, you can read more about this in the overview of our Token Metadata program.

This can be achieved by setting the treasuryMint parameter in the Auction House account to the mint account of the SPL-token of your liking.

When we were discussing Trade States, there was a third Trade State which was shown in the Trade State diagram: the FreeSellerTradeState. What's the utility of this Trade State?

During the introduction to the Auction House program, we briefly discussed how Auction House can be used by marketplaces to provide their own custom logic on how assets should be exchanged. This is where the FreeSellerTradeState comes in.

When a buyer intentionally lists their asset for a price of 0 SOL / SPL-tokens, the FreeSellerTradeState is generated. The Auction House can then change the sale price to match a matching bid that is greater than 0. This allows the Auction House to do complicated order matching to find the best price for the seller and the marketplaces can write their own custom logic to do this order matching.

All of the auctions we've seen so far have one thing in common. They are, what we call, Double Auctions. That is, they are un-timed auctions where buyers and sellers, bid and list until they find a common ground. However, there are several other forms of auctions such as English auctions and Dutch auctions which have become popular in the Solana ecosystem. The Auction House implementation is purposefully designed with instant sales in mind and does not offer other auction types out-of-the-box.

Auctioneer is a customized contract type, written by the user, that uses the composability pattern of Auction House to control an individual Auction House account.

We'll start by listing various libraries that can be used to get started with this program:

Once we understand the basics of Auction House, we can begin to learn how to trade assets on Auction House powered marketplaces:

We will also explore how to track listings, bids and sales on Auction Houses and how to fetch them: